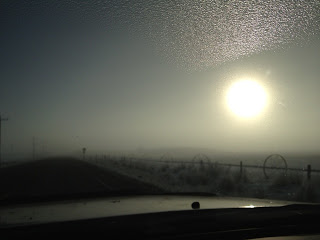 It's a strange thing to wear sunglasses in a fog. But I’m in Idaho so maybe it's actually normal. Driving east on Highway 20, the lack of visual distance wouldn't be much of a problem (I know this road by heart) except for the moisture freezing to the windshield.

At first, it just looks like fog but soon my view is truly blocked by ice that has slowly creeped down from the top. Hunching low over the steering wheel, I peer through an 8-inch band of non-frozen glass.

Idaho is a sunny place, so freezing fog or no freezing fog, its bright, hence the sunglasses. With the spreading ice blocking my view, I blast the defrost it as hot as it goes and, though not winning the fight, at least I halt the spread.

Maile leans forward between the front seats to get closer to the heat, her little ears twitching in the flow of hot air. I am sweating.

Then a strange noise startles my concentration. It’s not a SMACK! like a rock hitting the windshield, and not a tap-thwack as if hit by a leaf or tumbleweed. Its almost a thud as if I hit a bird, but sharper. The sounds is really a combination SMACK!, tap-thwack, thud.

There is actually time for me to think through all this, it was that non-startling. And then I see it.

Throughout this first Idaho winter, my windshield has collected a slew of significant dings from kicked up gravel. I don't think I ever had more than one at a time in Washington, but now I have nine. Most look like stars, with one or two legs extending a quarter inch or less. One ding even includes a full pebble-sized dent scooped out of the glass. I meant to get them fixed or melted out or whatever.

But, on this freezing fog morning, Idaho has a new lesson about Living in The West to teach me.

Lesson II: Dings are crazy buggers. Sandwich a windshield with really big dings between freezing fog on the outside and a blasting hot defrost on the inside, and before you know it, SMACK!, tap-thwack, thud! - one of those dings will get a wild hair and run all the way to the other side.

This is how I’ve come have an impressive 3’ long crack along the bottom of my windshield. Note to self: fix dings faster.

Other rules to winter living in The West (which is very different from the Pacific Northwest): 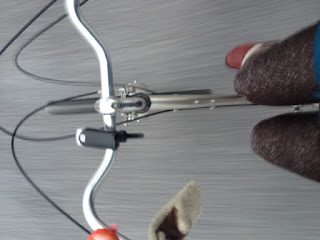 When biking to work in the snow, dress appropriately.
Tights dry fast but act like Velcro to snow. Soggy tights are kind of gross and cancel out the “cute” factor of your skirt/tights/boots combo. Jeans are better. Particularly when you wear tights or long johns under them.

Another biking-in-snow tidbit.
The mash potatoes might eliminate the “slick” factor of packed snow/ice, but it also acts like sand. Avoid it. Ride in the packed snow/ice instead, simply brake earlier and/or put your feet down faster.

Shovel your sidewalk and walkway, all the way to the grass.
If you don't shovel appropriately, as the snow melts it will puddle between snowy berms on either side of the walkway and re-freeze at night. It’s hard to hang on to your morning coffee when you’re slip-sliding away down an ice skating rink of a sidewalk.
*Multi-tasking bonus: Shovel as fast as you can to simulate shoveling someone out of an avalanche = great practice I hope you never have to use in reality.

When its 0degrees at the time of your morning run, it will hurt to breathe.
Wear a facemask and/or buff (depending on how cold it is). Also, wear long johns under your running pants. And don't wear glove liners, put on the real deal. Your dog will likely get cold too; invest in Mushers foot goop and a jacket. I’m serious. Don't laugh. She’ll like you way better.

Sledding before work is really, really fun.
When you wake up in the morning to fresh snow at your doorstep, don't dilly-dally. You’re from the Pacific Northwest after all and this doesn't happen all that often. Put on your snow pants and boots and get your dog ready. Then grab your sled and zoom all the way down the hill in a flood of giggles; then repeat this last bit. Best way to start a workday!

I’ve been compiling this list over the last month and was going to include a bit about how you have to watch out for getting lots of dings in your windshield. Yeah, well.


Posted by snarkybumbler at 8:01 AM