Looking Busy in a Room Full of Strangers 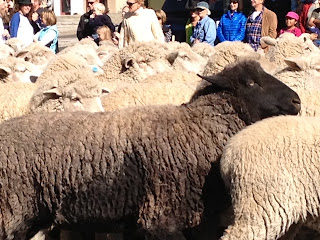 A flood of people rush by at intermission. Backing away from the aisle to give room, I get tangled up in the low hanging tassels that fasten a curtain back to make one big room out of two. They bob against my ears and forehead as I push them away like pesky flies. Stepping further back behind the curtain and into the no-mans-land overflow area. Alone.

Well, that’s awkward, I think. I’m foreign enough here to be get pushed into tassels. In my state of being unknown, I’m matter-less enough for no one to notice what is happening. Feeling a bit like the kid who got picked last for the team - or rather the kid that never got picked for ANY team - I wanting to disappear slightly.

As take a breath in to try drumming up courage to talk to a stranger, I can’t help but wonder, what did we do before the invention of the smartphone to provide distraction in uncomfortable social situations?

Feeling a little sheepish and insecure? Just pull out your smartphone and start tapping away! Because, even if alone, we obviously must be important to someone, somewhere if we're communicating on our smartphone. But where’s the challenge in hiding behind a 2x4” piece of plastic? If you leave your smartphone at home, or just want to mix things up a bit, here are a few tips for filling time in a large social setting when you’re the new person in the room, don't know a anyone else and are completely intimidated.

1. Go to the bathroom. Within a three-hour period of time, you can do this at least twice without it seeming odd. If you're a girl, this could take upward of 5 minutes a time depending on how long the line is not to mention walking to and from the restroom.

2. Order a drink, wine or gin and tonics are preferable but if feeling parched or that your wallet is pinched, stick with water. Go to the busiest end of the bar to order, it will take longer and you may inadvertently bump into someone – human contact!! This could take anywhere from 2 to 10 minutes depending on the line and the swiftness with which the bartenders pour.

3. Inspect the surroundings to great depth, tassels included. My, isn’t that plain, flat ceiling with slightly stained tiles lovely! And did you see the view out that broken window. Stunning. Depending on how many things there are to study, this could take all night.

4. Fix a wardrobe or hairdo malfunction. Bobby pin gone askew? Take it out, drop it at least once or twice before re-securing your tendril of hair back into place. Does your double-knotted shoelace look like it might possibly come untied? You certainly don't want to trip. You'd better untie, and then re-tie it. Also, re-tie the other one for good measure.

5. Feeling ballsy and want to talk but the event guests look intimidating? Chat up the event organizers. They have to be nice to you. They want you to spend more money on drinks/food/merchandise/future tickets. Ask them a complicated question like, the precise arrangement of chairs they use to fit so many people in the room and does it follow any sort of algorithmic, Pythagorean principle? (I don't even know what that means. See, just make shit up, it’ll throw them off.)

6. If all else fails, remember that everyone in that room was once the new person and likely felt just as out of place and comfort zone. Remember too that they once went to middle school and high school and probably wore headgear and one of those awful, oversized Raiders jackets and never learned to dance the Roger Rabbit either. If not currently, at least in teen years they were just as awkward as you feel. Smile in empathy at their silly N’Sync loving former self and have compassion to say hello.
Posted by snarkybumbler at 10:27 AM