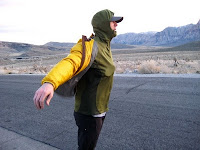 The day of March 13th, to be exact, I'd just arrived in the sunny city of sin to gamble. I wasnt putting my hard earned green backs on the line but was betting a bit of skill and pride on some beautiful, red sandstone. Anxiousness reigned - would I come out ahead, break even, or find myself in a deficit?

It was my first visit to Red Rock Canyon, and as we drove down Charlestown Blvd towards the park, I felt anticipation amp up as my jaw hit the floor. How was it that I'd traveled to Vegas a number of times before but never knew this incredible place was only a short drive from the strip? (guess i should've laid off the tom collins's...) 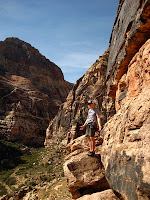 My good friend, patient climbing partner, and coworker - and the reason I was even there - Herr Folk had prepped me on what to expect from the rock and after an early flight and hearty breakfast, we were pulling into Calico Canyon. Wind that tried to barrel us over and nearly took limbs off by forcefully slamming car doors couldnt stop me! I wanted to get on that rock!  Letting Herr Folk take first lead, I watched as he climbed higher, and higher, and higher...Oye. Couldnt we have started on something a little, ahem... shorter? A few pitches in, including one gentle lead by yours truly and I really felt like the cobwebs might be shaking off.

A day later, in Mesculito Canyon, nerves nearly got the better of me as I barely pulled a 5.7 trad pitch. It took quite a bit of cursing (i know, i know... i thought i was angelic too. apparently, i'm more like a sailor), a few roughly grunted "watch me's!" and some terrified "taking" at the most gigantic ledge-like rests, I topped out. Honestly, it was brutal. I was hot, tired, sniffly from a cold. And I was really, really scared. I began to wonder if this climbing schiznit was really for me. Maybe I'm not built for this? Maybe, I should stay the ever-enthusiastic follower, happy to belay her leader wherever they want to go - as long as I can safely stick with pulling gear, not placing it? Maybe I'm not ready to play with the big boys and girls who are willing to take risk? Maybe, I never will be. Ugh. There was no "maybe" about hating that feeling.

Oh, March. How long ago you are! (thankfully) 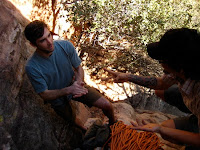 Another day, the opportunity to climb with some SLC friends who let me be middle on a couple of longer climbs in Mesculito gave me a new sense of nervous confidence. And I was mercilessly teased for being a sandbagger, and for not being able to heckle (still working on that.). Sandbagger? Me?!  I had the strength in arms and feet, a bit of balance and finesse to keep up, but the head? No sandbagging here boys, that part of me was still back in primary school of climbing.

My last full day, I was lucky enough to participate in a clinic at the Rendezvous. (I'm incredibly lucky to work a company that not only supports my hobbies personally, but occasionally sends me out on mini-adventures to do them as part of my job.). I'd been sent to the Red Rock Rendezvous to help out Senor Folk and had been granted a precious afternoon with one of our athletes, Sarah Hueniken. She's an incredibly kind and kickass guide from Canmore and was teaching a clinic on anchors and gear placement for women. I got to mock-lead, then rappel down with her as she examined my gear. The verdict? It was all solid, all fall-worthy. A few small recommendations, but overall, her take: gear is good, confidence? well, honey, that's what needs the work. 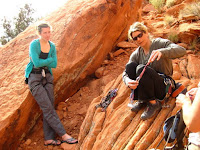 I left, having had an incredible experience, surrounded by amazing people who also happen to be inspiring climbers. I pushed my limits and was scared out of my gourd! And I realized, though it may have taken a fellow female climber to point it out, that I actually can bring it to the table, if I only have the guts to believe in myself.

So I took that 2cents to heart, and I'm starting to ues it. And I'm seeing just how much more I can throw down. The year of climbing. So far, so good.


PS - still havent figured out the quote biz.... so, 1. Herr Folk nearly getting blown over, 2. Giving me the "what the heck, scared sister?" stare down in Mesculito Canyon, 3. A good game for determining the leader played out by Jesse and Shingo, 4. Sarah sharing her superwoman knowledge with us
Posted by snarkybumbler at 11:16 PM